Open-Concept Kitchen: Pros, Cons And How To Do It Right

No matter the square footage, there is an unflagging tendency towards full opening of the living area. The benefits are aplenty, but the solution is not devoid of drawbacks. Before you bust through the walls, make sure you know the basic design rules and that your decision is based on a good balance of pros and cons. 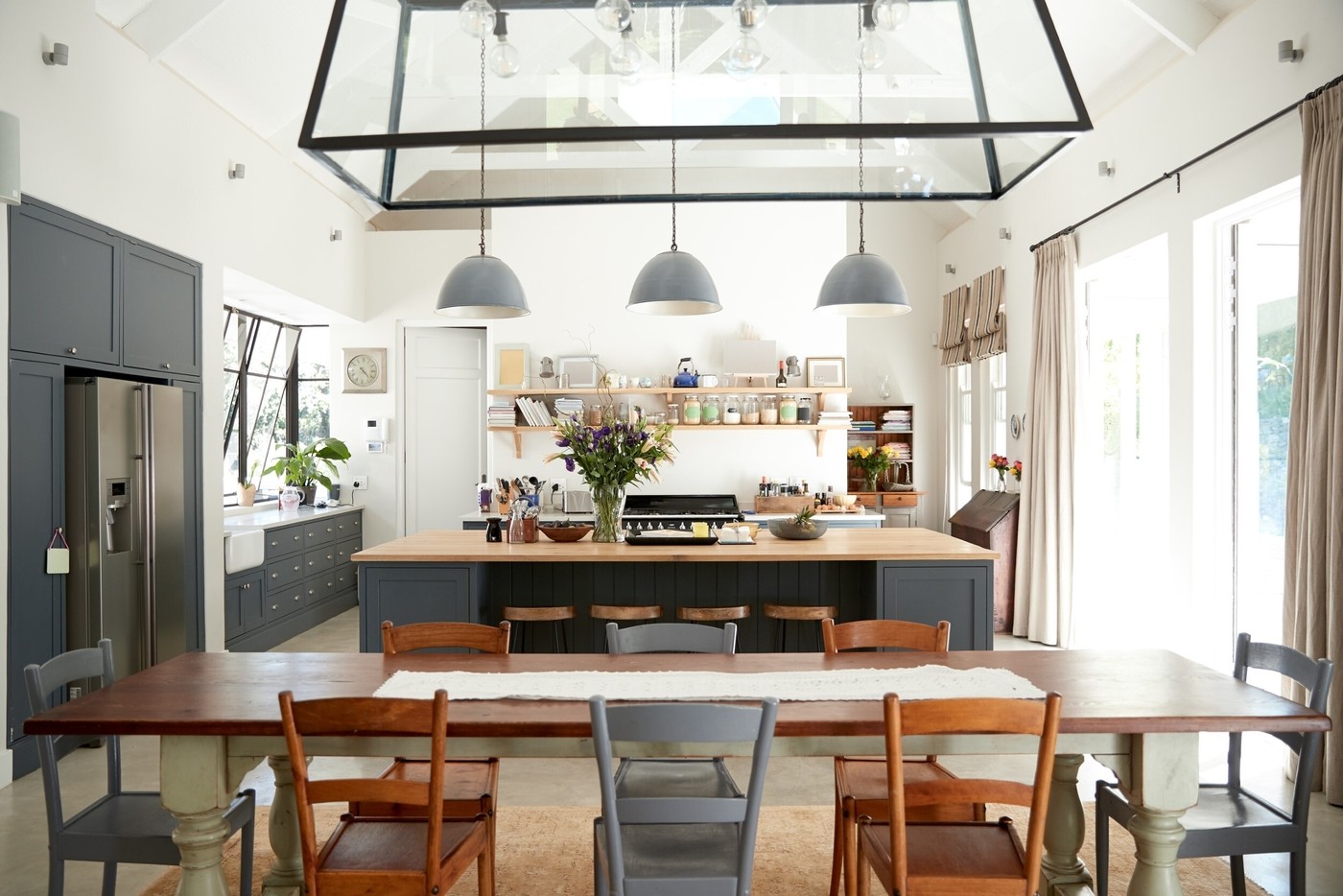 The open floor plan for years has been a dominant choice for single-family houses, and this is for a variety of reasons. First of all, it looks good and gives a sense of airiness, as opposed to spaces chopped up into smaller bits. Then, if you have a family of five, plus pets, the openness of the design will sure make it easier for everyone to mingle and spend some valuable time together.

The solution is really popular among homeowners who pay a lot of attention to celebrating the meal time, when you don't just gather at the table for 15 minutes, but also cook together and lounge around after dinner, watching TV, chatting or playing with kids. Parents of small children seem to be particularly keen on the idea that they can go about their daily home routines and keep an eye on the little ones all the time.

However, the concept of a kitchen open to the living room is also eagerly utilized by owners of small apartments, where the open plan simply creates the illusion of a larger space. The idea seems to be great for those who love inviting people over. The guests do not feel cooped up in a tiny living room and the host can interact with them while puttering around the kitchen.

If you find all these arguments compelling enough not to care about the potential disadvantages, use some tips on how to make your new space pretty and functional. Designing a kitchen within an open-plan environment might come with a number of hidden pitfalls, so if you feel you need some guidance, do consider the following suggestions.

Why open up the space if you plan to divide it again with folding screens, bookshelf partitions, curtains or fringe panels? If you care for privacy, don't knock down walls. Successful open plan designs are all about a sense of airiness and spaciousness that comes from the lack of barriers for the eye, but also from the choice of appropriate furniture.

To promote unity, harmony and balance -- key factors in open-plan environments -- try to avoid furniture which is too tall or heavy as compared to the furniture in the living room area. If you choose bulky, elaborately decorated upper cabinets, they will not only close in on the room and make it look smaller, but will also draw too much attention and visually cut off the kitchen from the rest of the space -- and that's exactly what we are trying to avoid here.

Of course it does not mean mean you should avoid upper cabinets at all. When you take down a wall, you deprive yourself of storage space, so to prevent clutter from ruining the effect, you will need quite a lot of storage options. It's just that your cabinets should be simple, unobtrusive and perfectly coordinated in terms of style and color with the rest of the space.

A defining feature of most open-plan environments is a kitchen island, which acts as some sort of a border between the cooking and lounging areas, yet without making the two seem separate. Sometimes it is also a breakfast bar or a rectangular dining table. These solutions, however, are fit for larger spaces. If you knock a wall in order to make a tiny apartment more attractive and comfortable, cluttering it with bulky units would be totally counterproductive.

On the other hand, leaving the space between the cooking unit and the sitting area completely empty is not a good idea either. Some people may feel awkward having their backs stared at as they are preparing the food. And it just looks so… unfinished. In the design shown below, a central partition wall acts as a TV panel on one side and a stylish breakfast bar on the other. Since the panel is relatively narrow and both spaces are perfectly unified with color and flooring, there's still a sense of flow that makes the whole seem harmonious and well-designed.

Be careful with open shelving

Too many closed upper cabinets can make a room seem smaller and heavy, but so can the clutter of open shelving. It does provide a degree of interest and warmth in a separate kitchen, but will it go well with a minimalist family area in an open plan arrangement? There are pros and cons to using open shelves in just about any room, but when it comes to open-concept designs, they need special consideration. And dust in not your greatest enemy here.

If you insist on using shelves to visually separate the kitchen units from the dining or lounging area, make sure that neither the shelves nor the items placed on them draw too much attention. Again, why obstruct the view if the aim was to create the illusion of a larger space?

Carla Aston from Aston Design Studio says that great floors are the backbone of an interior, and nowhere is it truer than in open-plan arrangements. Whether you go for wood, tile, stone or lino will pretty much depend on functionality, budget and the style of you home, but the rule of thumb for open areas is to use as much of one material as possible. Continuous flooring brings the sense of unity and spaciousness into the overall design, as opposed to various floor materials chopping up the space into smaller bits.

If you prefer the durability of tile in your kitchen and think of spreading it into the family room, choose good-quality natural stone rather than porcelain, which could look cold and take away the coziness of the place. Ideally, you should avoid having wood and tile butt together at the point where the kitchen meets the lounging area. But if you've decided to use two different types of materials, at least make sure they are the same color tone so that it is not a high contrast transition.

The greatest challenge of designing an open-plan environment is to create a large multi-functional space that looks harmonious and well-coordinated. To promote unity and flow, add textures and colors that visually link the two spaces. If you have a color on the wall in the family area, try to reflect it in the color of the kitchen tiles or appliances and accessories. The transition will be smooth and the eye will embrace the whole, rather than get stuck at any given section of the space.

While there is no fixed palette for open-concept designs, there is a tendency to use light colors as they look fresh and optically enlarge interiors. Whites and light gray are the most common choices, combined with warm wood or neutral contemporary pieces. If your space is particularly tight, remember to avoid warm color tones. Even when you choose white, make sure it's more grayish than creamish.

No need to say a lot more about this one than what has already been stated. Open plans need an overall stylistic coherence, so that all areas interact with each other without individually standing out. Obviously this is not to say that rustic cannot coexist with modern effectively, but such combinations require a good deal of decorating know-how and intuition.

When creating an open plan area, you are left with much less storage space, so it is important that your furnishing scheme can adopt to various functions. Islands and peninsulas are perhaps the most versatile pieces in this respect. From a kitchen point of view, they provide a working surface and useful space for storing all sorts of cooking accessories. On the other hand, they can be used as a breakfast bar and a convenient option for storing cookery books, cereal boxes, preserves or snacks.

A word against open plan

You can monitor your children, entertain guests (if you can chat and chop at the same time) or watch your favorite soap opera while making dinner -- that's all true, and there's no denying that for a lot of people the open plan will work just perfect.  But there's a flip side to all of these benefits  and you'd better learn about them before it's too late and your major remodeling turns out to be a major disappointment.

First of all, cooking is not as neat and artistic as it is shown on TV shows. Most of the time it involves a good deal of mess-making, traveling smells, as well as more or less hilarious mishaps that you might not want your guests to witness. Dropped the turkey?  Don't worry. It's not a crime to swear by the five-second rule in emergency situations … as long  as nobody's watching. And why have your guests or family dine and relax against the background of dirty, smelly pots and pans?

Now imagine you're entertaining someone who's really driving you nuts or someone has just said something terribly embarrassing at the table. Where are you going to hide to compose yourself a bit? Behind the kitchen island? Sometimes you just need a moment behind closed doors. With open-concept kitchen, there's no getaway from a pesky mother-in-law, annoying programming watched in the family room and the vigilant eye of you kids when you feel like gobbling a handful of marshmallows.

You didn't actually think that it works like a one-way glass, did you? Sure it's convenient to always have an eye on your toddlers, but they can see you, too. And they won't be toddlers forever. Once they start bringing their teenage friends over, there will be no end to red faces and awkward moments, unless you never wear head curls, algae facials or really unflattering clothes at home. Chatting on the phone while cooking? Chances are those watching TV will start throwing pillows at you (there's a reason we call them 'throw pillows'). And the other way round -- once in a while YOU will be at the receiving end of the kitchen noises and smells, like when you're trying to get a nap on the sofa.

All in all, open plan can be a fabulous solution in terms of style, but having one's kitchen separate from the living room has a host of benefits that shouldn't be ignored. Take the time to consider the lifestyles, age and personalities of everyone at home before committing to a certain kind of living space.