A good oak barrel makes an excellent base for a table. But why repurpose a barrel to make a table base? The answer lies in the process of winemaking.

Long ago, the Egyptians, Romans and other people around the Mediterranean stored their wine in clay amphorae. The clay bottles were easy to seal, clay was plentiful and easy to make into shapes. Some people of the area used wood from palm trees to make barrels, but it was hard to get them to bend into the barrel shape.

As the Romans traveled north, it became harder to transport wine for the troops. Wine was safer to drink than water and provided a small amount of nourishment. Clay amphorae, however, were heavy and breakable. This made them hard to transport. When Rome invaded Gaul, they encountered a people who brewed beer in wooden kegs, often made from oak. The oak was easier to make into barrels than palm. The wine transport was solved.

After a time, it was discovered that wine aged in oak barrels acquired a smoother flavor, so it became popular to age wine in oak barrels. Unfortunately, after about eight refills, the barrel would stop imparting that nice, oak influence. Some of the barrels can have a second life as containers for aging whiskey, a liquor that benefits from the wine residue in the oak. But even that use will come to an end. At this point, the barrel could be used to store rainwater or repurposed as something else, such as a planter or a table.

There is something unique about a barrel table. The oak barrels are sturdy. Some enterprising manufacturers even used the inside of the barrel as a tidy little storage area. With a nicely trimmed and hinged door, such a table is very attractive. Some barrels do not survive the repurposing intact, but that doesn’t mean that all that beautiful oak wood need go to waste. The individual staves make excellent legs for stools. The ends make good table tops and stool tops. Oak is a beautiful wood, and the oak that has its first life as a wine barrel is no exception. 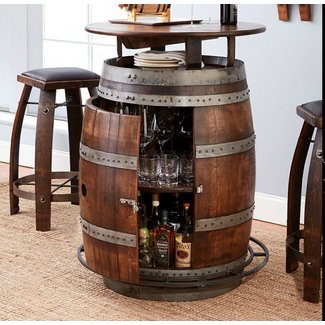 this bistro wine barrel table is made from an oak barrel with shelves inside for your glassware and bottles of liquor and comes with two barstools. The table and bar stools are done in a whiskey finish and has an wrought iron foot rail 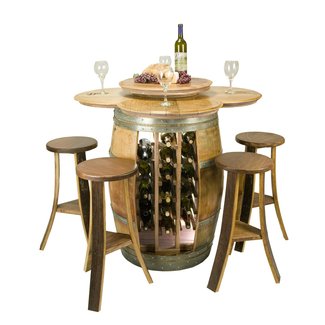 An entire dining set made out of retired oak wood wine barrels, it’s the only set that you need in order to create a rustic and inviting dining environment. A wine rack is integrated into the base of the table to give you your very own complete bistro. 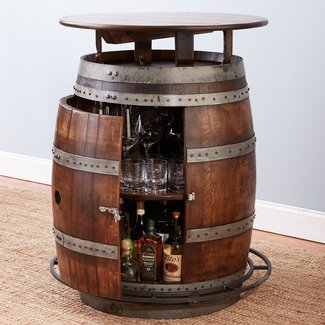 Unusual all-in-one bistro table and storage area for glasses and bottles of liquor. It is made from a oak barrel with a pine tabletop. It also has a wrought iron foot rail. A perfect addition to your man cave or breakfast nook. 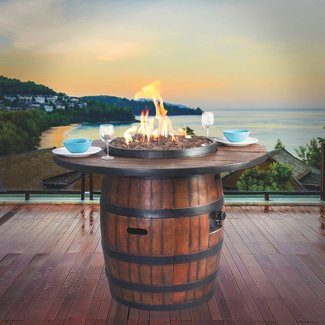 Warm up your outdoor setting with sophisticated classiness through unique fire table. The design is inspired by a wine cellar bodega theme and features a wine barrel as a stand. If you’re a wine lover, then it's hard to make a mistake by getting this one-of-a-kind fire table. 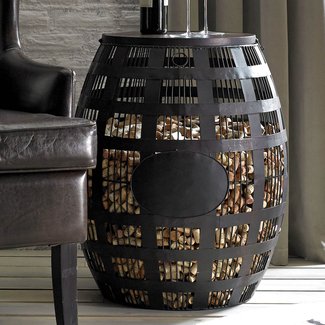 Decorate your indoor setting with this unique novelty wine barrel side table. It features a classy "old world" charm and elegance. It's the ideal accent addition for the wine enthusiast. It can store more than 2,000 corks and is also a perfect gift for any wine lover. 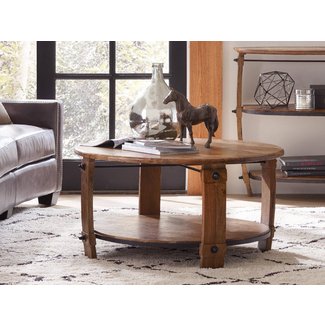 Crafted from acacia solids, this sought-after wine barrel coffee table is the perfect living room addition with its casual feel and unique details. Consider getting the unit if you want your coffee table to be turned into a memorable conversation piece. 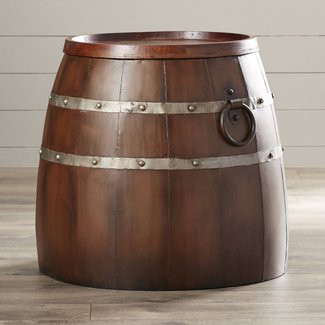 Hand-painted to create the perfect illusion of having an actual wine barrel sit inside your very home, it’s the side table that you will love to have as a simple glimpse of it takes you to the beautiful wineries in Napa Valley. 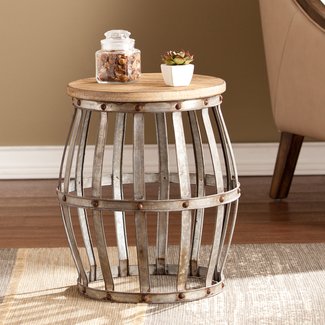 This accent table is perfect if you are going for that rustic or farm-inspired look. It also features a wine barrel shape, making it exuberate a modern western vibe. The table is sturdy and crafted from high-quality materials. It's a great addition if you are a wine lover.

If you are a wine lover, then it's hard to make a mistake by getting this unique side table. Not only it's a table but it can also store and organize a couple of your fine wines and even hold a few wine glasses. 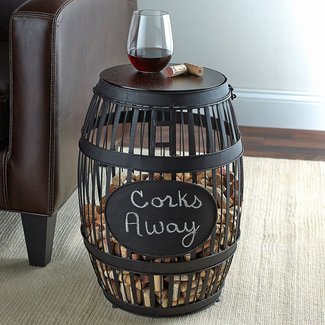 This cork catcher table can store up to 500 corks. It's the perfect accent addition for any wine lover. The table also features a chalkboard styled plaque so you can do a bit of personalization by writing any fun phrase you can think of. 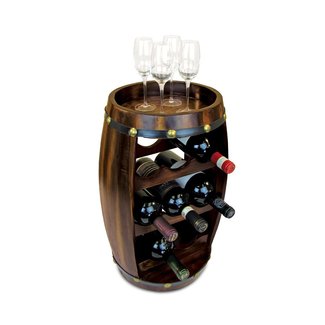 This is a side table that every wine lover should have. Apart from it's a sleek and modern design, it can store and organize a couple of your wines. The table can hold up to four or five wine glasses. It's the perfect gift for any wine enthusiast. 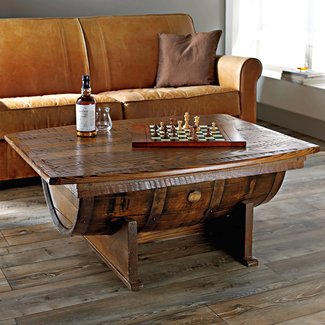