The design of the Series 3300 Armchair was conceived by Arne Jacobsen – the legendary Finnish modernist and an iconic figure of 20th century architecture and design. The armchair, manufactured by the Republic of Fritz Hansen furniture company, has been in constant production since its introduction in 1956. This timeless piece of furniture, despite its considerable age, still looks extravagant and intriguing, making it a great, tasteful addition to any modern interior. 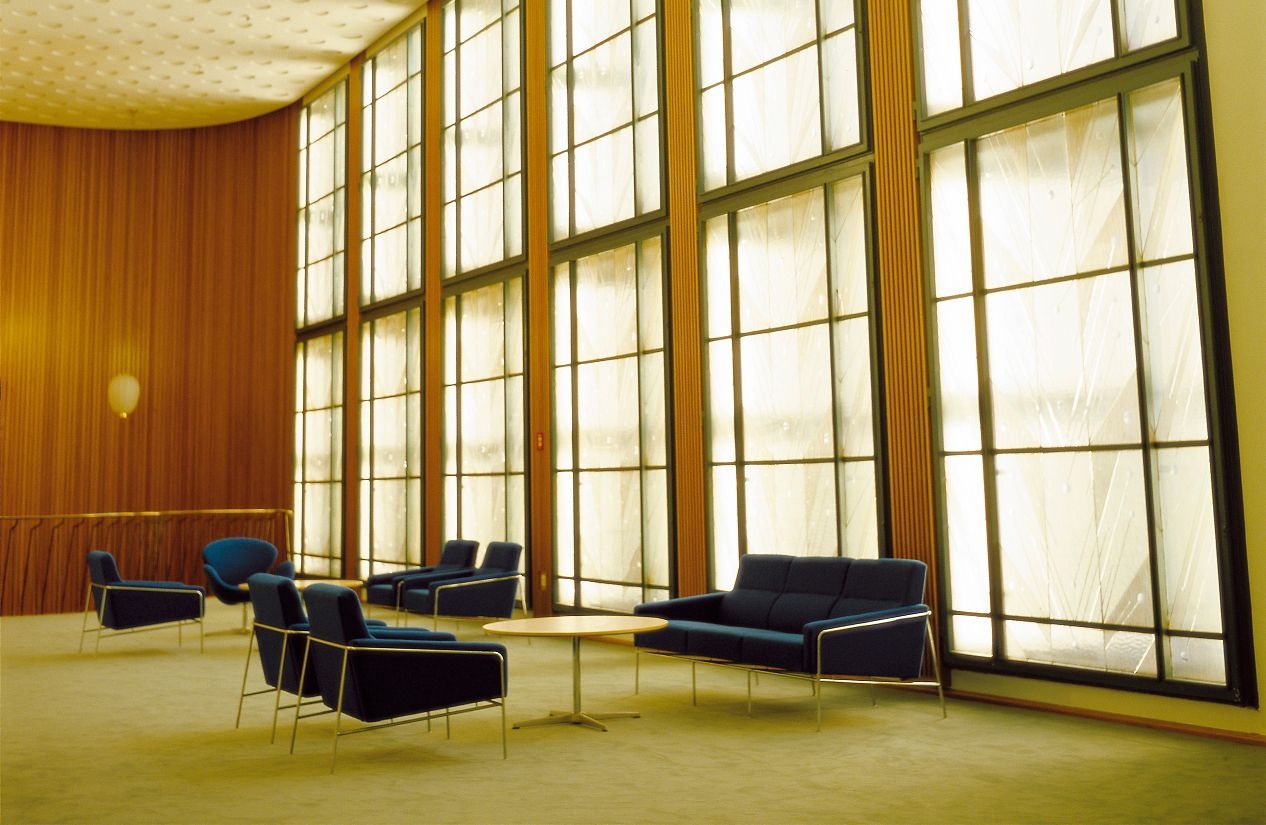 The Series 3300 Armchair was developed in 1956, along with the a 2 and 3-seater sofa, as a part of the Series 3300 Collection. The furniture collection, along with the famous Egg, Swan and Drop chairs, was used to furnish the lobby of the Radisson Blu Royal Hotel in Copenhagen. The entire building, together with its interior and furnishings, was designed by Arne Jacobsen for the Scandinavian Airline System (SAS). While working on the project of the hotel, Jacobsen, who had worked as a landscape architect in the past, pursued a "modern garden" theme. It resulted in the organic, oval forms of the furnishings, which match Jacobsen’s concept. The exception is the Series 3300 Collection, which is characterized by sharper, geometrical shapes. Rumor has it that Jacobsen based the series on a sofa that he had created for his own home, which makes the connection between the collection and its designer more intimate and personal. The armchair, together with the sofas, was enthusiastically received by the public and critics. The entire collection is commercially available under the Republic of Fritz Hansen brand.

Although many people would certainly engage in polemics over the arguable appeal of the SAS Hotel itself, the design of the 3300 Series Armchair does not leave any room for such a discussion. Its cutting-edge futuristic design, combined with the impeccable quality of craftsmanship, has earned the chair a very special place in the history of interior design. Besides its aesthetic qualities, the armchair is also fully functional and very comfortable. ‘Designophiles’ would immediately notice the similarities between Jacobsen’s armchair and two other design classics: the Le Corbusier LC2 Petit Modele Armchair and Wegner’s CH101 Lounge Chair.

The Series 3300 Armchair uses the external, chrome coated tubular frame, which resembles the frame of the aforementioned LC2 Armchair. The front legs of the armchair are made from a single tube, which also goes around the entire periphery of the armchair providing support for the seat. The back legs are made from two vertical pipes welded to the peripheral tube. All four legs are finished with glides and are spanned together for the additional structural strength. The base adds visual lightness and provides a balanced contrast to the capacious seat. The armchair’s geometrical form is simple and subtle, yet elegant and sophisticated. The Series 3300 Collection was meant to provide a contrast to the organic shapes of the Egg, Swan and Drop chairs.

The armchair’s shell is made from wood, which is then covered with the cushioning made from cold-cured polyurethane foam. The armchair provides high level of comfort and its deep seat allows the user to assume a wide range of positions. One can certainly conclude, that its distinctive, trapezoidal armrests must have served as an inspiration for Hans J. Wegner, when he designed his famous CH101 Lounge Chair. The upholstery is available in a wide selection of fabrics, such as: Fame, Diablo, Remix, Tonus, Hallingdal, Steelcut, Steelcut Trio, Divina, Divina MD, Divina Melange, Comfort and Milani; and supple leathers: Basic, Classic, Rustic, Natural, White, Optical White, Elegance and Sense.

The overall appearance of the armchair is extraordinarily appealing and stylish. Even today, more than six decades after its presentation, when modernism is not an extravagant or radical concept anymore, the armchair, as well as the entire Series 3300 Collection, has neither aged nor become trite. It still looks fresh and contemporary. An ideal chair for lounge or waiting areas, as well as a tasteful addition to any modern house. 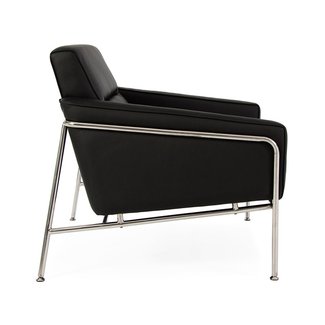 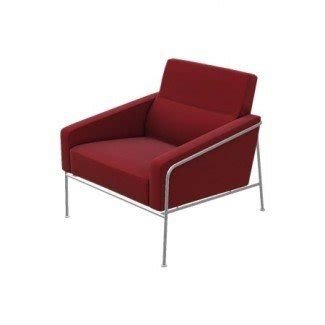 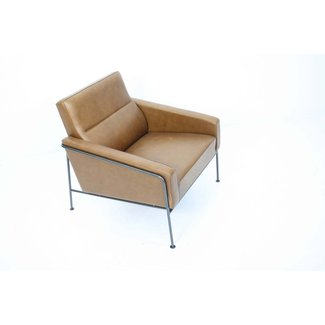 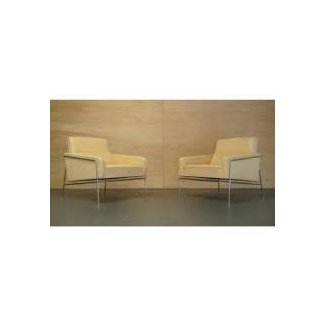 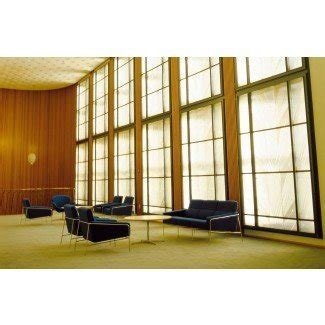 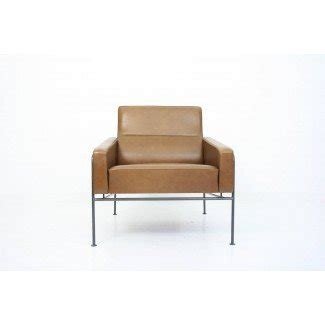 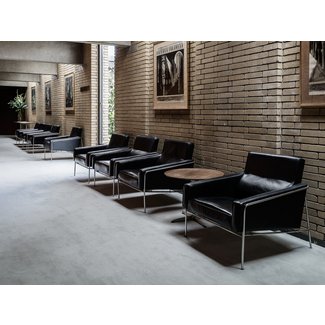 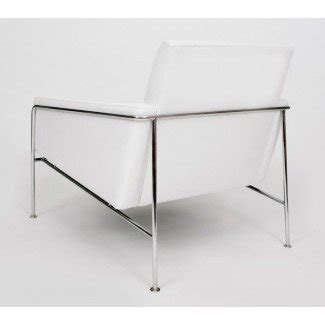 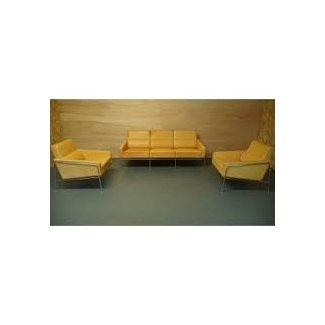 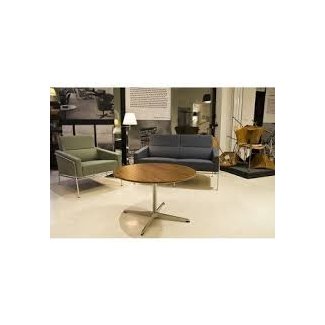 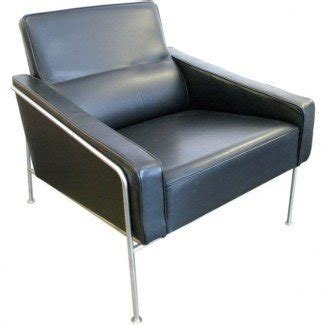