To recognize a gothic wedding dress, you need to first define “gothic.” The term originates in the British music scene and is an off-shoot of post-punk bands. The style also has a strong relationship with steampunk, a clothing style that owes much to early science fiction and alternative history buffs. The wedding gown style also harkens back to Victorian English mourning clothes, or even to Spanish traditional wedding dresses. The reason the Spanish wedding dresses are black is to symbolize the bride’s “until death” commitment. Queen Victoria, in fact, was the first bride to break with the black wedding dress tradition. Hers was the first “white wedding.”

Gothic wedding dresses, therefore, could be black or black and white. Depending on the brand of goth, they could simply be traditional wedding dresses with a somber touch. If they are steampunk, then there needs to be something of the mechanical about them. A good example of steampunk costuming is Steam Powered Giraffe, a stand-up comic musical group that features robots in alternative English history costuming. Some episodes of Dr. Who also provide good steampunk examples. Other media examples of goth or gothic costuming include The Adams Family, especially little Wednesday Adams. And one should not forget the practiced morbidity of the female lead in Beetle Juice.

Your gothic wedding dress should reflect your personal taste. You might find your wedding gown at a vintage clothing store, or you could make your own. If you wish to project a true goth image, avoid purchasing ready-made “goth” clothing from the mall. According to a quote from the Goth Bible: a Compendium for the Darkly Inclined, purchasing mall ready-mades marks one as a poseur – someone who wants to be goth, but really isn’t. Worse yet, if you have not yet passed your 25th birthday, you might be marked as a “batbaby”!

All joking aside, goth clothing is characterized by dark colors, heavy velvets, lots of lace, jet beads and a proliferation of petticoats. It doesn’t hurt to add some fishnet hose and an imitation spider web or two – just for extra verisimilitude. Goth wedding dresses, when put together by a knowledgeable designer, can be incredibly beautiful. 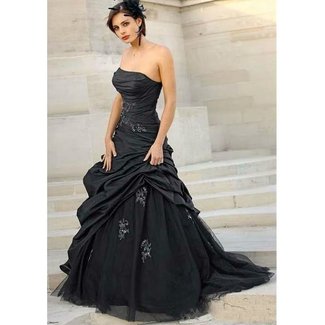 black for a wedding? Just say it is a symbol of ‘until death do us part’ as the black Spanish wedding dresses symbolized. This beautiful dress has a sleeveless bodice with a flowing black lace skirt and short train.

this gothic black on white wedding dress is perfect for an Adams Family themed wedding. Tight bodice flows down to see-thru black tulle over a white skirt with a short train of black tulle. Wearing this dress will make a wedding that is unforgettable. 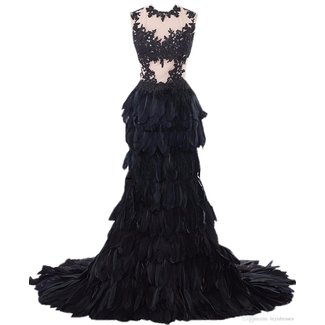 If you don't want a dress that's too gothic for your special day, then consider this stunning dress. There will be glimpses of your skin with the sheer fabric, which is perfect for showcasing your figure. The floral appliques are a testament to the quality of this piece. 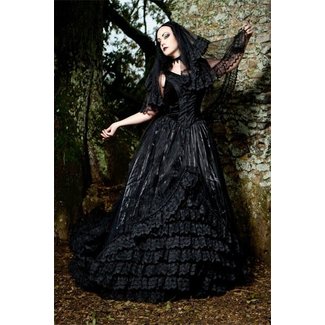 think outside of the traditional wedding box and go from white to black gothic. Made from black lace that is combined with mesh, velvet, and tafetta with a scooped neckline, long train and lace veil. Add a black lace choker. Beautiful bride. 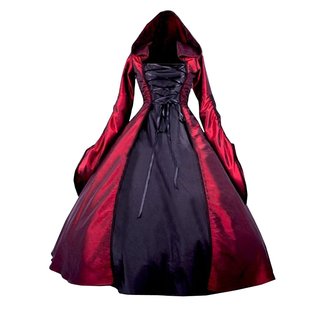 This witch dress will make you want to cast hexes on all the men who've wronged you! It’s perfect for Halloween parties, stage performances, and role play! The package includes a stunning Lolita dress and a petticoat. 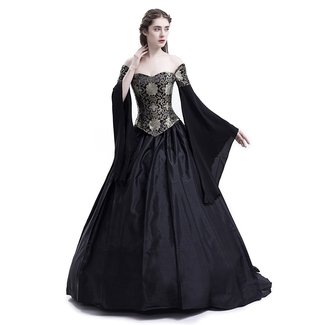 You will definitely feel like a radiant vixen in this 100% satin dress. We love the statement wide long chiffon sleeves and jacquard pattern - details that will make you the most fabulous every single time you wear the piece. 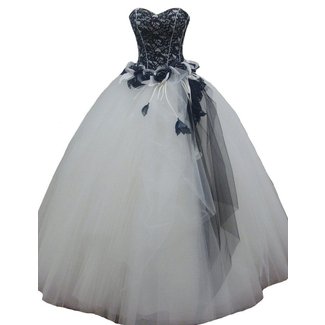 Give a beautiful ball gown a striking twist especially with tulle lace and satin and you get the most stunning Goth dress, perfect for weddings, formal occasions, and even parties! The piece is a traditional gown with that rock 'n' roll twist and it's available in several sizes. 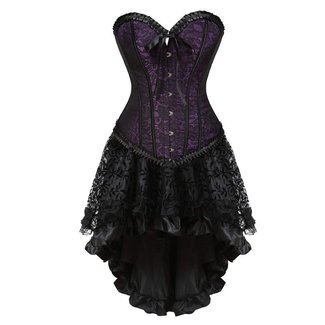 The perfect outfit for you that takes you back to the 1800s! This Gothic-styled corset features lace details and a plastic boning for slimming and support. You won't have to worry about getting uncomfortable in it as the corset is made of premium satin! You’ll stand out with this beautiful piece. 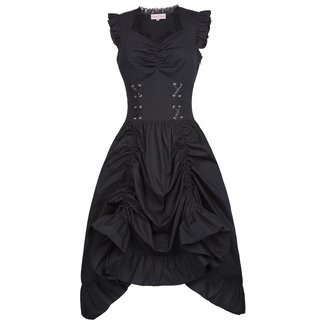 Is Goth your vibe? If yes, then this sleeveless Victorian dress has you covered! The dress has a V-neck, a ruched bodice and detailed corset that instantly turns you into a Goth queen. It's available in several colors as well!

This corset is stylish and will instantly boost your outfit's elegance as well as your figure! It’s the best piece to add to your dress, especially with the slimming boning which offers shape and support. The corset is made of quality satin and includes 12 flexible bones to give you an hourglass figure. 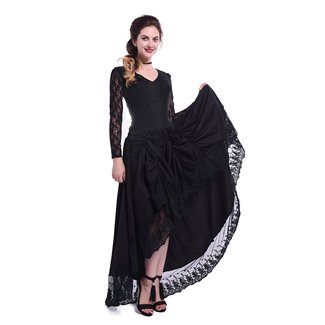 This classic Goth dress is perfect for Halloween with the tiered embellishment and drawstring that creates the elegance and sophistication that you're on the lookout for! It’s made with quality cotton fabric and lacing for that romantic and sexy touch. 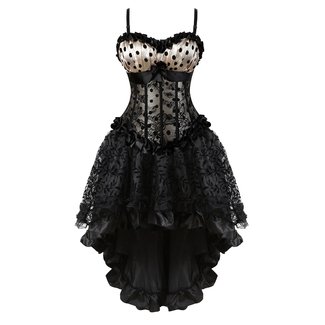 This masterpiece is made of 90% polyester 5% cotton and 5% elastan. As it has a wide elastic waistband, it will fit different body types. As for the lace floral skirt, it completes the corset to give you the most sensual outfit for parties! 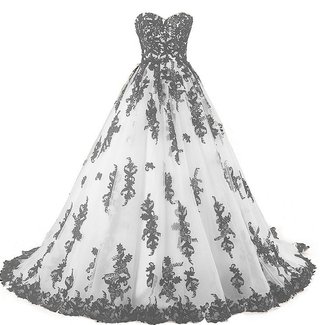 This glamorous dress is perfect for you if you want to channel your inner princess! With its lace detailing, tulle and satin material, and court train, you will be the star of the night. The bodice's shape is super flattering, especially when the dress is made specifically to your size! 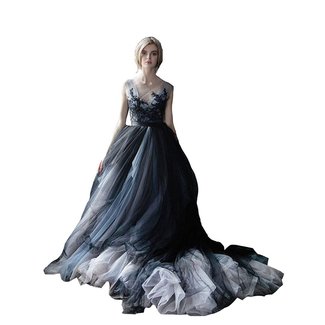 This one's not your typical wedding dress! If your wedding's theme is sophisticated Gothic, then this tulle piece will have every single guest on your wedding day bowing at your feet. It fits sizes US 2 to 16 and the manufacturer offers the best customer service around for customization! 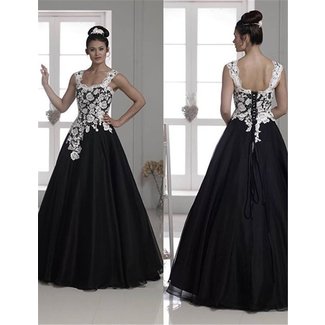 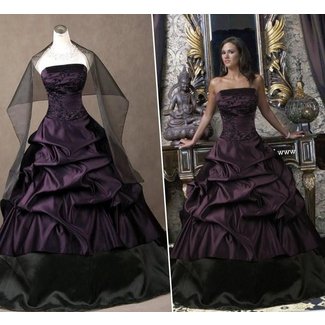 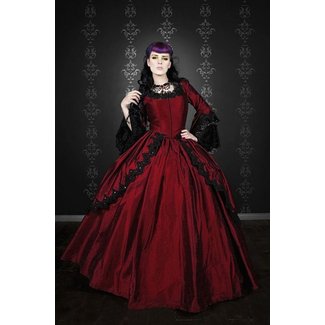 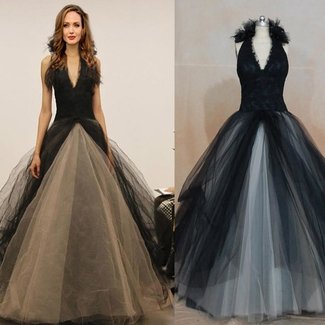 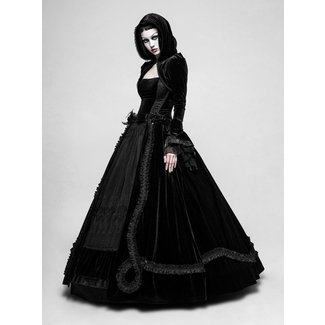 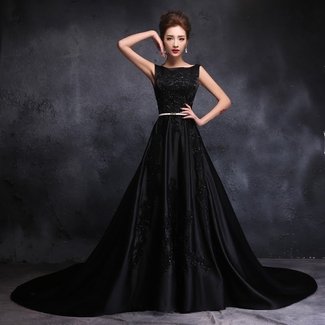